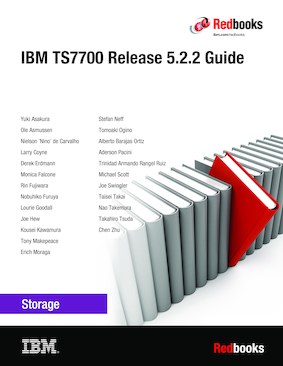 Read in Google Books - This link opens in a new tab
Share this page:

This IBM® Redbooks® publication covers IBM TS7700 R5.2. The IBM TS7700 is part of a family of IBM Enterprise tape products. This book is intended for system architects and storage administrators who want to integrate their storage systems for optimal operation.

By using the same hierarchical storage techniques, the TS7700 (TS7770 and TS7760) can also off load to object storage. Because object storage is cloud-based and accessible from different regions, the TS7700 Cloud Storage Tier support essentially allows the cloud to be an extension of the grid. As of this writing, the TS7700C supports the ability to off load to IBM Cloud® Object Storage, Amazon S3, and RSTOR.

Note: The latest Release 5.2 was split into two phases:

New and existing capabilities of the TS7700 5.2.2 release includes the following highlights:

The TS7700T writes data by policy to physical tape through attachment to high-capacity, high-performance IBM TS1160, IBM TS1150, and IBM TS1140 tape drives that are installed in an IBM TS4500 or TS3500 tape library.

The TS7770 models are based on high-performance and redundant IBM POWER9™ technology. They provide improved performance for most IBM Z tape workloads when compared to the previous generations of IBM TS7700.

Appendix A. Feature codes and requests for price quotations

Appendix I. Case study for logical partitioning of a two-cluster grid