The EX2200 occupies a single rack unit, delivering a compact solution for crowded wiring closets and access locations where space and power are at a premium. The EX2200 switch’s 10-inch depth and low acoustics also make it ideal for open office deployments.

A dedicated rear panel RJ-45 Ethernet port is available for out-of-band management, while a rear panel USB port can be used to easily upload the Junos operating system and configuration files.

In this section we discuss the features and benefits.

To avoid the complexities of the Spanning Tree Protocol (STP) without sacrificing network resiliency, the EX2200 employs a redundant trunk group to provide the necessary port redundancy and simplify switch configuration.

The EX2200 runs the same Junos OS used by other Juniper Networks EX Series Ethernet Switches, as well as all of Juniper’s routers and Juniper Networks SRX Series Services Gateways. By utilizing a common operating system, Juniper delivers a consistent implementation and operation of control plane features across all products.

These attributes are fundamental to the core value of the software, enabling all Junos OS-powered products to be updated simultaneously with the same software release. All features are fully regression-tested, making each new release a true superset of the previous version. Customers can deploy the software with complete confidence that all existing capabilities will be maintained and operate in the same way.

The EX2200 provides the highest levels of flexibility and features in its class for the most demanding converged data, voice, and video environments, delivering a reliable platform for unifying enterprise communications.

The EX2200 fully integrates with Juniper Networks Unified Access Control, which consolidates all aspects of a user’s identity, device, and location. This enables administrators to enforce access control and security down to the individual port or user levels.

Working as an enforcement point within UAC, the EX2200 provides both standards-based 802.1X port-level access control for multiple devices per port and Layer 2 - 4 policy enforcement based on user identity, location, and device. A user’s identity, device type, machine posture check, and location can be used to determine whether access should be granted and for how long. If access is granted, the switch assigns the user’s device to a specific VLAN based on authorization policy. The switch can also apply security policies, QoS policies, or both, or it can mirror user traffic to a central location for logging, monitoring, or threat detection by intrusion prevention systems.

The EX2200 includes port profiles that allow network administrators to automatically configure ports with security, QoS, and other parameters based on the type of device connected to the port. Six preconfigured profiles are available, including default, desktop, desktop plus IP phone, WLAN access point, routed uplink, and Layer 2 uplink. Users can select from the existing profiles or create their own and apply them through the command-line interface (CLI), J-Web Software interface, or management system.

In addition, a feature called system snapshot makes a copy of all software files used to run the switch (including the Junos operating system, the active configuration and the rescue configuration) that can be used to reboot the switch at the next power-up or as a backup boot option. The Junos OS software can also be pre-installed on a flash drive and used to boot the EX2200 at any time.

When managing a group of EX2200 switches, the Network and Security Manager provides system-level management across all Juniper Networks switches in the network from a single console. 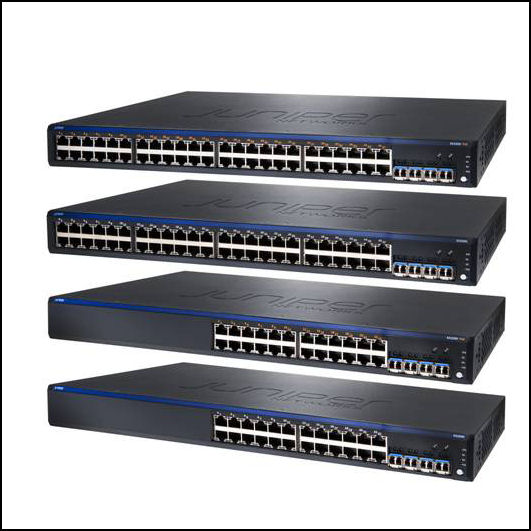 In this section we list the EX2200 Ethernet Switch specifications.

The hardware specifications are:


Others who read this publication also read