This IBM® Redbooks® Analytics Support Web Doc describes how to maximize the performance of IBM DB2® backups. Backing up a database is a critical part of any disaster recovery plan. Making sure that the backup completes in a reasonable time frame means that there is always a valid backup available in case of emergency. This document describes the following elements that are critical to good backup performance:

Backing up a database is a critical part of any disaster recovery plan. Making sure that the backup completes in a reasonable time frame means that there is always a valid backup available in case of emergency. This document describes the following elements that are critical to good backup performance:

The backup process model consists of the engine dispatchable units (EDUs) db2agent, db2bm, and db2med. If the backup uses a storage manager, an additional db2vend process is created. The db2agent EDU does most of its work during the start of the backup, and then waits for the backup to complete. The tasks that it performs include the following actions:

The db2bm EDU acquires a backup buffer from the empty queue, and then fills the buffer by reading data from its assigned table space. The db2bm then places the backup buffer on the full queue to be written to the backup device by the db2med EDU.

The db2med EDU is responsible for acquiring a backup buffer from the full queue and writing it to the backup device. If the backup is being written to disk, it handles the input/output (I/O) directly. If the backup is being written to a storage manager, it transfers the full buffer to the db2vend process. After confirmation that the db2vend process successfully saved the contents of the buffer, the db2med EDU returns the backup buffer to an empty queue for reuse by the next db2bm EDU.

Figure 1 is a graphical representation of the backup process model. 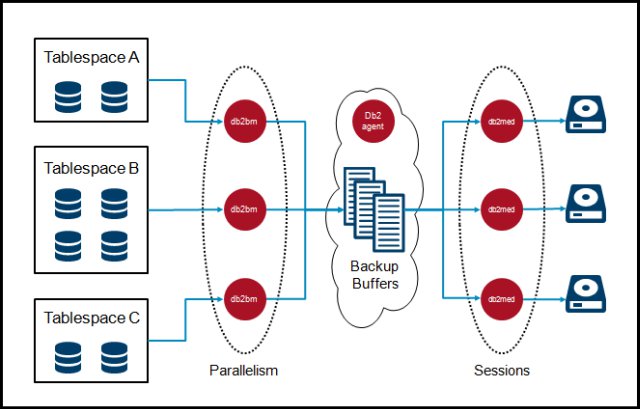 The following concepts are critical to designing and implementing a successful backup strategy:


When performing incremental backups, DB2 keeps track of whether table spaces have been modified since the last backup. If a table space has not been modified since the last backup, the scanning of that table space can be skipped. However, if even one page has been modified in a table space, every page in the table space must be scanned to find the modified page. This can result in the db2med EDU being idle for a long time, and can potentially cause storage managers to think that the backup is hung and to close down the connection to the db2vend process. This results in a failed backup. Make sure to set idle timeout values with the storage manager appropriately.

Consider several items to maximize the performance of database backups:

When using prefetching for backups, ensure that the NUM_IOSERVERS database configuration parameter is greater than or equal to the number of db2bm EDUs created.

Starting with DB2 V10.1 FixPack 2, every successful backup or restore operation prints statistics in the db2diag.log file. This feature also exists in DB2 V9.7, but must be enabled by using the DB2_BAR_STATS registry variable.

The meanings of the various columns are as follows:

If the backup was performed using the COMPRESS option, two additional columns are present:

The following example depicts a scenario in which the db2bm EDUs spend more than optimal time waiting on a free buffer:

The following example depicts a scenario in which the db2bm EDUs spend more than optimal time compressing data:

Parallelism = 5
Number of buffers = 10
Buffer size = 16781312 (4097 4kB pages)
In this example, the db2bm EDUs are spending 53% (28.28/53.58) of the time compressing data. One alternative is to use table-level compression so that the tables are stored in compressed format in the database. This option eliminates the need to do compression during every backup.

The following example depicts a scenario in which the db2bm EDUs spend too much time in WaitQ:


In this example, 2 out of 3 db2bm EDUs spend almost all of the time in WaitQ. A high WaitQ value indicates that the db2bm EDU was idle for most of the backup. The number of Buffers processed is also heavily skewed to one db2bm EDU, which indicates that there was one table space in this database that was significantly larger than the rest. Redistributing data so that the table spaces are equally sized improves backup performance.