Today's global organizations depend upon the ability to unlock business insights from massive volumes of data. Now, with IBM FlashSystem 900, they can make faster decisions based on real-time insights and unleash the power of the most demanding applications, including online transaction processing (OLTP) and analytics databases, virtual desktop infrastructures (VDIs), technical computing applications, and cloud environments.

Easy to deploy and manage, the IBM FlashSystem 900 is designed to accelerate the applications that drive business. Powered by IBM FlashCore™ Technology, IBM FlashSystem provides the following characteristics:

FlashSystem 900 can be configured in capacity points as low as 2.4 TB usable after RAID 5 protection. Coupled with 10 Gbps iSCSI, FlashSystem is positioned to bring extreme performance to small and medium businesses (SMBs) and growth markets. Figure 1 shows FlashSystem 900.

FlashSystem 900 has these characteristics:

FlashSystem 900 has the following scalability and performance features:

FlashSystem 900 has the following energy and space efficiency characteristics:
Manageability and security

In addition to the canisters, IBM FlashSystem 900 enclosures include two battery modules and two power supplies, which are all redundant and hot-swappable. All components are easily accessible from the front or rear of the unit, so IBM FlashSystem 900 does not need to be moved in the rack, and any top access panels or cables do not need to be extended. This configuration makes servicing the unit easy. The front of the enclosure has the two battery modules on the far left of the enclosure, a LED indicator panel next to this, and twelve IBM MicroLatency module slots to the right of the panel and battery modules, as shown in Figure 3.

Figure 3. Front view of FlashSystem 900
Figure 4 shows the components of IBM FlashSystem 900 from the rear. One of the two canisters is removed, and you see two interface cards and two fan modules. The power supply unit to the right of the fans provides redundant power to the system. All components are concurrently maintainable except for the passive midplane, enclosure LED board, and power interposer board. All external connections are from the rear of the system. 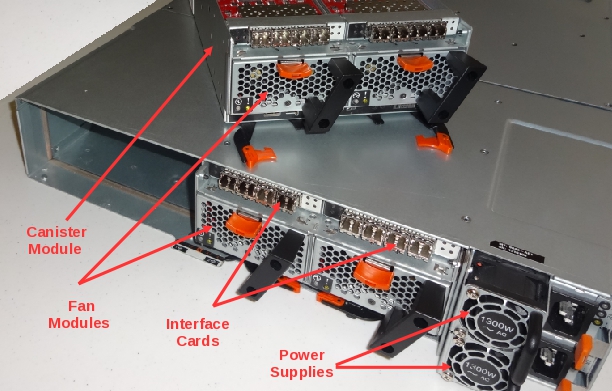 Figure 4. Rear view of FlashSystem 900 with one canister removed

Figure 5 shows a rear view of FlashSystem 900 with Fibre Channel or FCoE interfaces. The canisters are to the left (large units) and the two power supply units are to the right (small units).

Table 1 lists the specifications for FlashSystem 900.

The following set of Machine Types are supported in AAS as follows:

All FlashSystem 900. Storage systems include the IBM MicroLatency modules and blanks, power supplies, fans, and canisters preinstalled. The IBM MicroLatency module type and quantity and the host interface I/O cards must be pre-specified. The batteries are packaged separately and must be installed by the person performing the FlashSystem 900 installation, before powering on the machine.

The following items are also shipped with FlashSystem 900:

IBM FlashSystem 900 supports only one interface type per system. For example, it is not possible to use two Fibre Channel interface cards and two InfiniBand interface cards in the same enclosure.

Interface cards are sold in groups of two feature codes (providing a total of four cards), and supply interfaces of either eight or 16 ports for each system.

FlashSystem 900 supports 16 ports of 10 Gbps iSCSI for clients looking for alternatives to SANs. The iSCSI interface card looks similar to the FC/FCoE cards with fiber optical connections as shown in Figure 5 on page 5.

FlashSystem 900 provides configurable IBM MicroLatency module capacity. All modules are hot-swappable. It is important to configure the amount of storage needed correctly as it is not possible to dynamically add additional storage.

With RAID 5 mode, up to 2048 logical volumes (sometimes referred to as LUNs) can be created in the system, with a minimum size of 1 MB and a maximum size of the full available system capacity. Under the direction of the management module, RAID module Field Programmable Gate Arrays (FPGAs) can coordinate data transfer between modules, for example, to rebuild the system-level RAID 5 data layout.

FlashSystem 900 supports the RAID 5 configurations with the latest capacity points as listed in Table 6.

Depending on your needs, and if capacity expansion is expected over time, consider initial RAID 5 configurations with 12 IBM MicroLatency modules which provides the least capacity penalty for RAID 5 protection.

FlashSystem 900 supports the network cables that are listed in Table 7.

In addition, the FlashSystem 900 has the following functions:

Both of these operations can be done concurrently and do not cause loss of access to data. Both operations do require that you purchase the Feature Code AF14: Encryption Enablement Pack.

If you are planning to implement either Hot Encryption Activation or Encryption Re-key, inform IBM support so that they can monitor the operation

Hot Encryption Activation
Hot Key Activation allows an unencrypted FlashSystem to be encryption-enabled while the system is running, without impacting customer data in any way.

Note: The system requires that at least two copies of the encryption access key are made, for a total of at least three USB drives containing the key.
Encryption Rekey

Rekeying is the process of creating a new key for the system. To create new keys, encryption must be enabled on the system. However, the rekey operation works whether there are encrypted arrays or not.

For more information see the FlashSystem 900 Knowledge Center at:

Note: The FlashSystem 900 Knowledge Center will be live on 20th March.

Note: During the battery reconditioning cycle, no concurrent code upgrades can be performed. See the FlashSystem 900 Knowledge Center for more information at
https://ibm.biz/fs_900_kc.

The storage configuration includes defining logical units with capacities, access policies, and other parameters. No software needs to be installed on host computers to administer FlashSystem 900 beyond a web browser with Java support or a standard SSH client.
Web interface

To the right of the upper middle of the GUI is the function key for managing the security of the user that is logged in. In the upper right corner is the Help button, which provides information about licenses and gives access to the FlashSystem 900 Knowledge Center.

On the far left of the window are five function icons, from top to bottom:

The management GUI is the primary tool to manage the system. Figure 7 shows an overview of the management GUI and the general location of associated menu options from the front of the machine. At the bottom of the window are three status indicators. These indicators provide information about these characteristics: 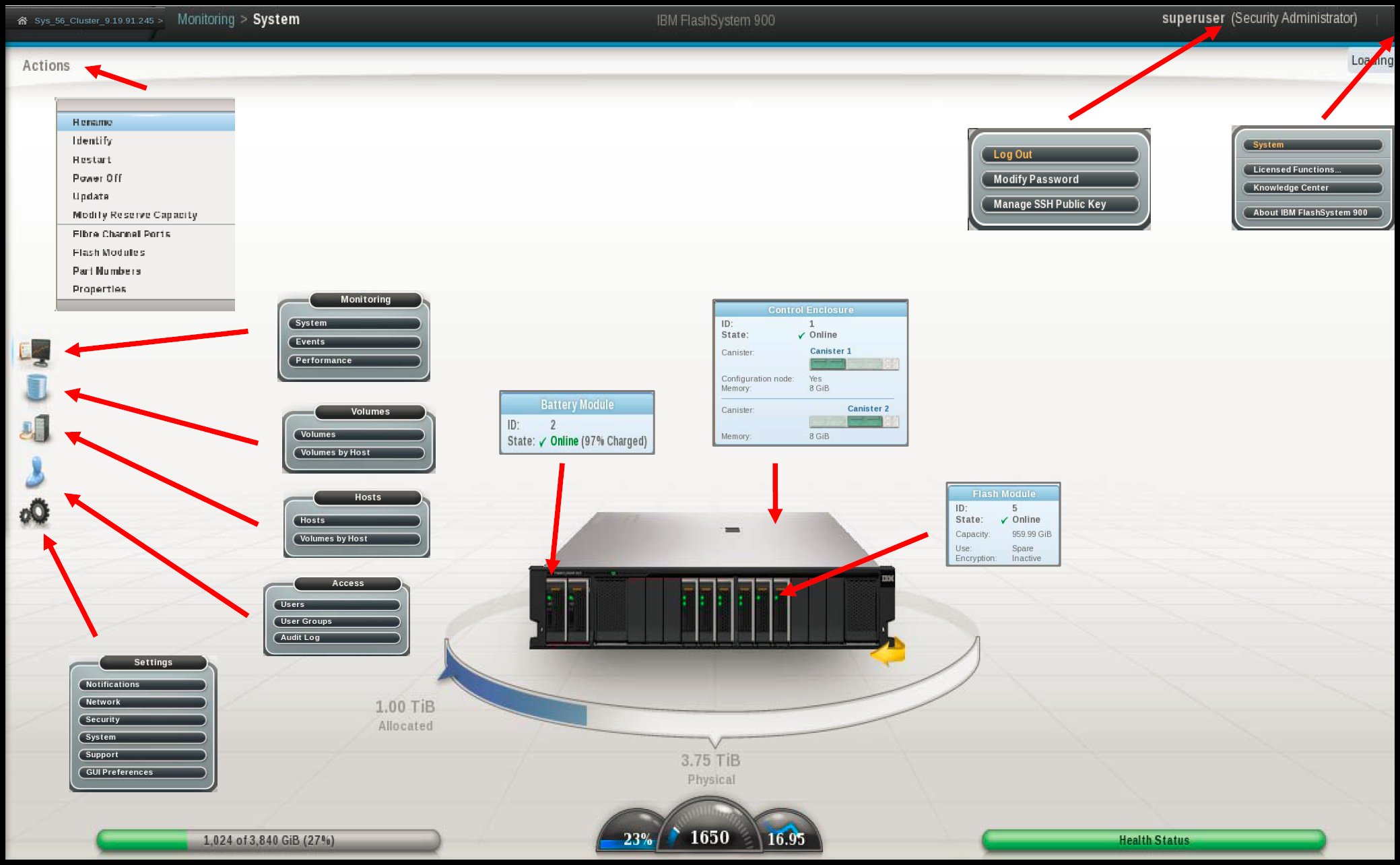 Figure 8 shows the management GUI and the associated menu options from the rear of the system. Looking at the rear view from left to right, you see the states highlighted for the fan module in canister ID 1, the left canister ID 1, Fibre Channel port ID 1, and the power supply unit ID 1. 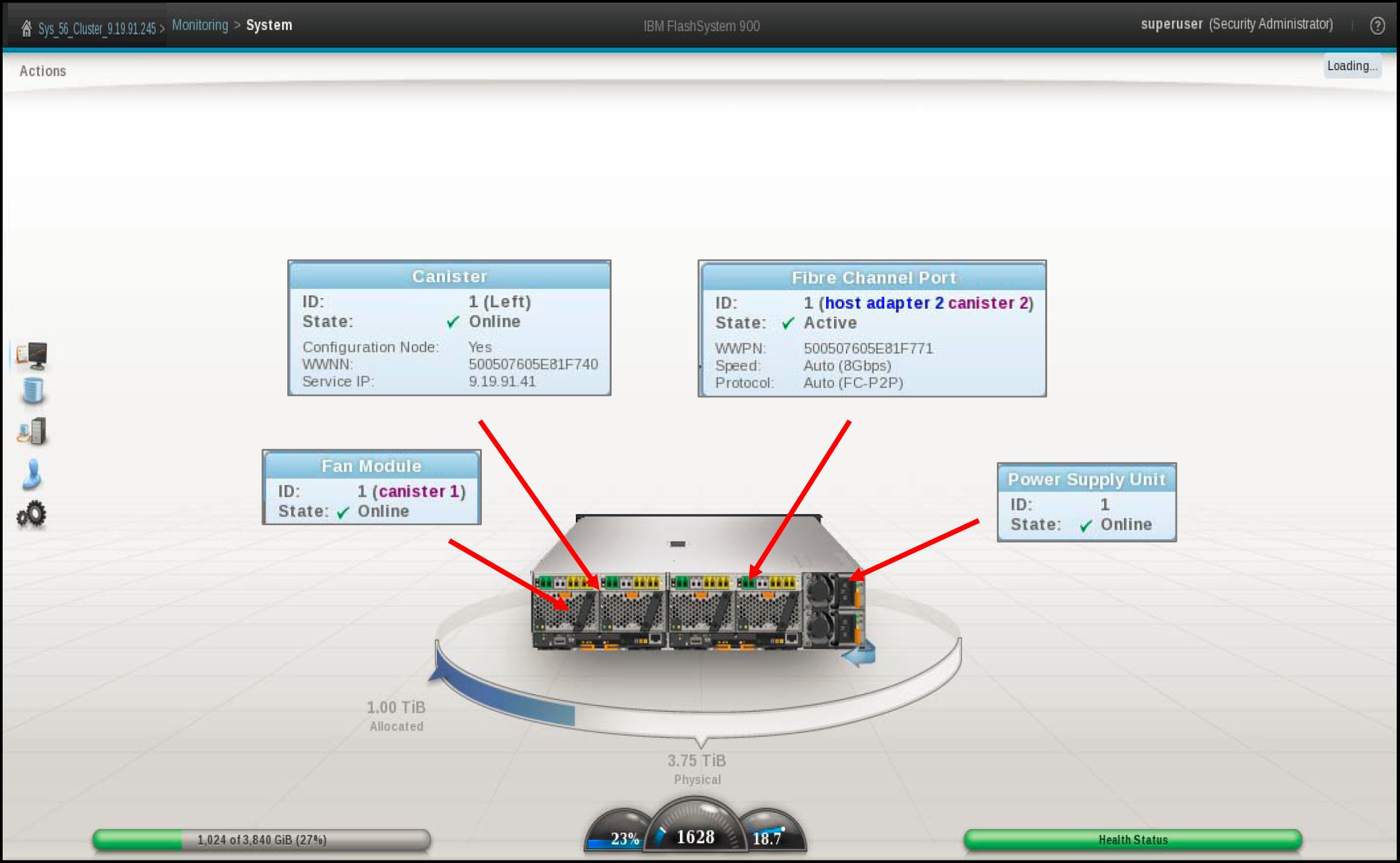 Enter the FlashSystem 900 performance monitor by clicking Monitoring -> Performance. The first time after the browser window is opened, system latency is displayed as shown in Figure 9. 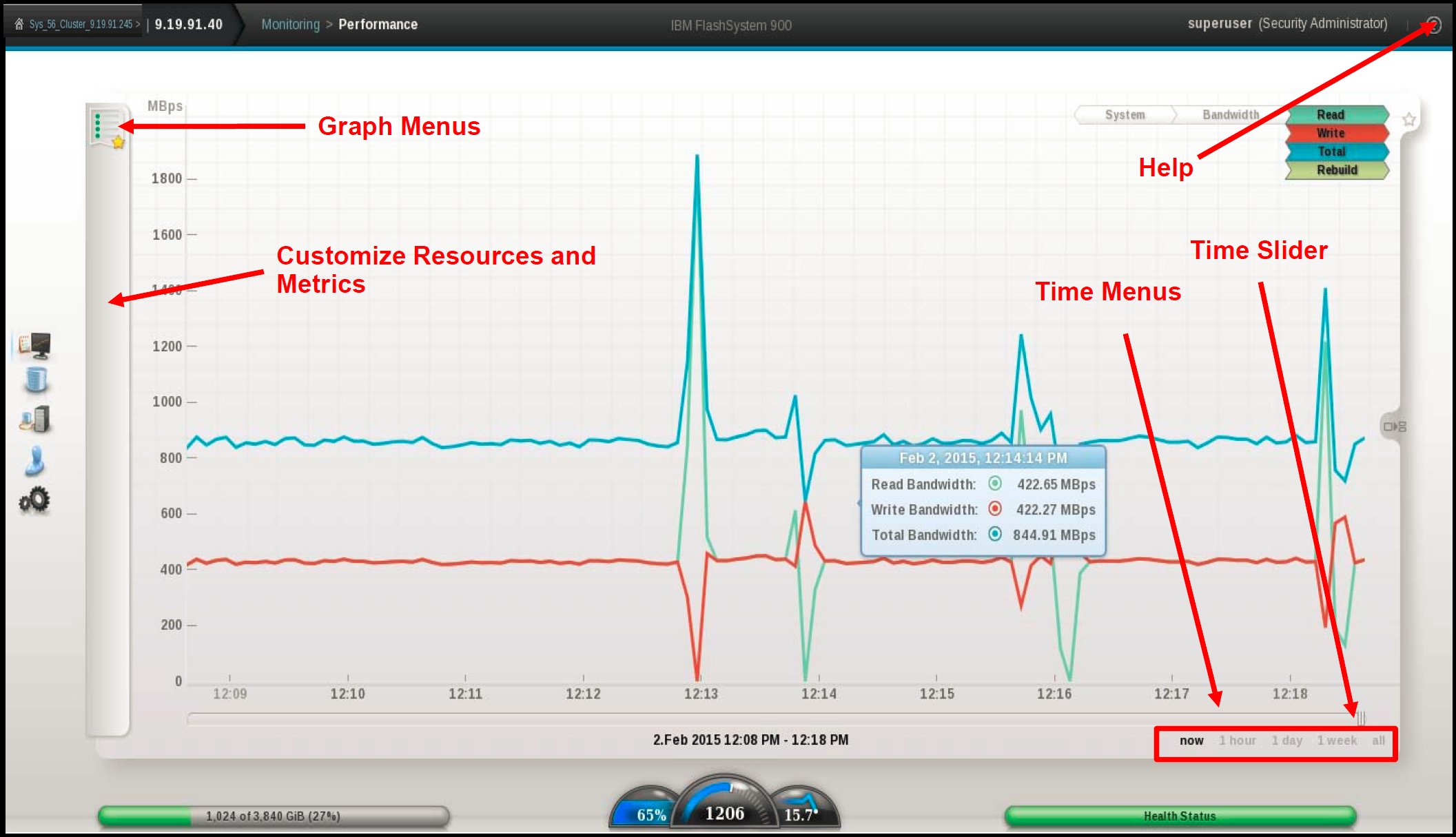 Five performance charts can be reviewed from the graphs menu:

The CLI provides support for the following tasks:

FlashSystem 900 has the following physical, electrical, and environmental specifications:

IBM FlashSystem 900 is shipped with a one-year and a three-year warranty.

Technical Advisor (TA) support is provided during the warranty period. The TA enhances end-to-end support for the client’s complex IT solutions. The TA uses an integrated approach for proactive, coordinated cross-team support to allow customers to maximize IT availability. TA support for FlashSystem is delivered remotely and includes a documented support plan, coordinated problem and crisis management, reporting on the client's hardware inventories and microcode levels, and consultation about FlashSystem microcode updates. The Technical Advisor conducts a Welcome Call with the client and provides a statement of work for this support.

Flash media within IBM FlashSystem is covered in full during the warranty and maintenance period. The system is also Energy Star certified.
IBM Global Financing

IBM Global Financing offers competitive financing to credit-qualified customers and IBM Business Partners to assist them in acquiring IT solutions. The offerings include financing for IT acquisition, including hardware, software, and services, from both IBM and other manufacturers or vendors, and commercial financing (revolving lines of credit, term loans, acquisition facilities, and inventory financing credit lines) for IBM Business Partners. Offerings (for all customer segments: small, medium, and large enterprise), rates, terms, and availability can vary by country. Contact your local IBM Global Financing organization or see the following website:
http://www.ibm.com/financing

IBM Global Financing offerings are provided through IBM Credit LLC in the United States, and other IBM subsidiaries and divisions worldwide to qualified commercial and government customers. Rates are based on a customer's credit rating, financing terms, offering type, equipment type, and options, and can vary by country. Other restrictions might apply. Rates and offerings are subject to change, extension, or withdrawal without notice.

Financing solutions from IBM Global Financing can help you stretch your budget and affordably acquire the new product. But beyond the initial acquisition, the IBM end-to-end approach to IT management can also help keep your technologies current, reduce costs, minimize risk, and preserve your ability to make flexible equipment decisions throughout the entire technology lifecycle.

For more information, see these resources:


Others who read this publication also read